This Low Carb Stuffed Cinnamon Roll is an amazing treat that's very easy to make. It starts with the magical fathead dough base, and adds lots of yummy goodness! 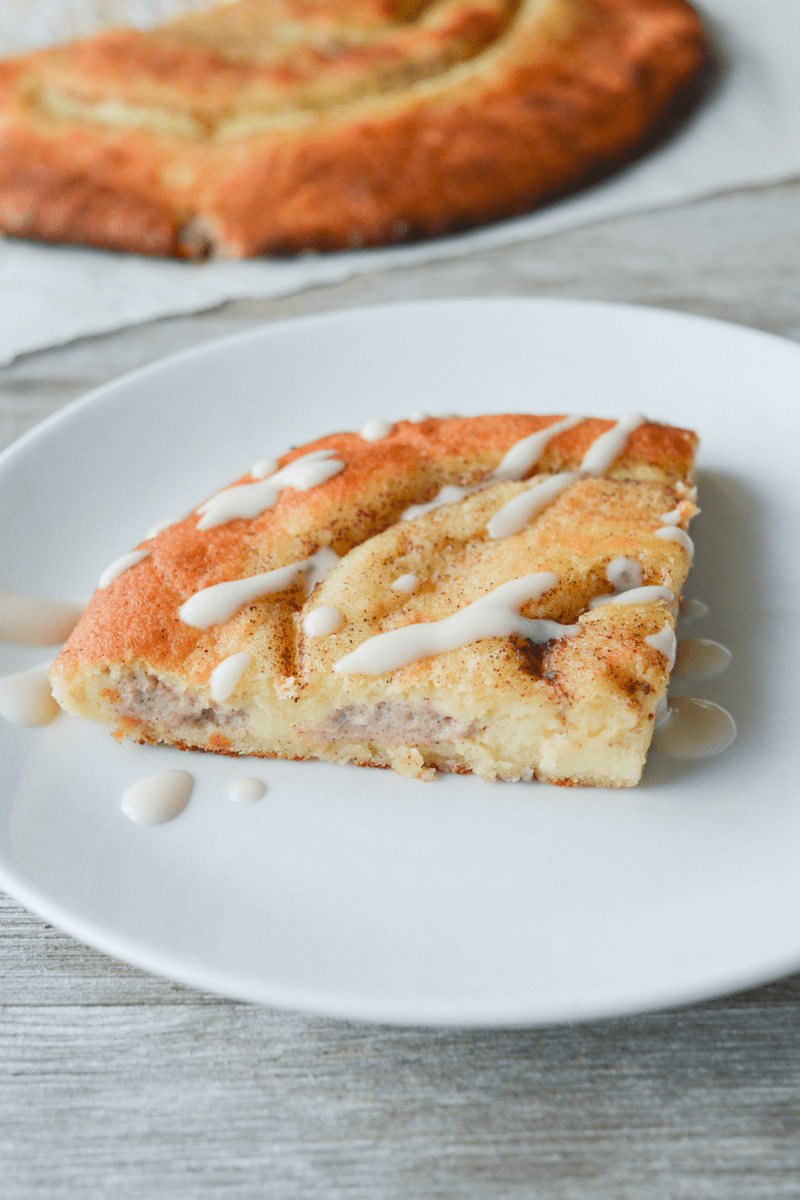 I love cinnamon rolls so much, and adore how easy they are to make even when you're cutting the carbs.

At first I was, like many people, pretty skeptical about mozzarella cheese being a major ingredient in a sweet dough...but bear with me. You can't even tell. I mean it.

I've been interested in doing something a little more unique for a while, and that makes me really excited for this recipe.

To be completely honest, I was a little hesitant to post it even though it's completely delicious. Reason being...it is a little higher in carbs than I would normally eat per serving.

That said, if you can fit this stuffed cinnamon roll in your macros, I know you're really going to enjoy it!

I know most keto-ers stick to 20 net carbs per day so this can definitely work, but I'd also classify it as a sometimes treat. 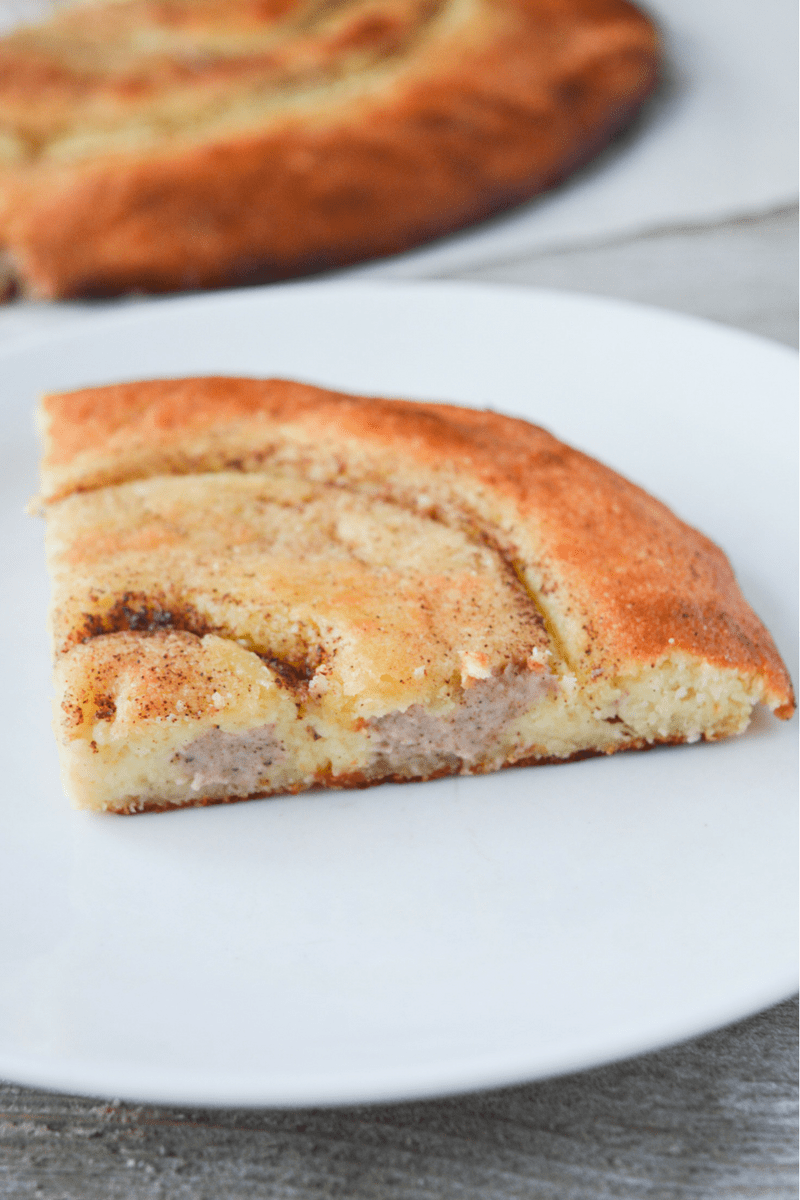 The ingredients for this dish are really simple. Almond flour, mozzarella, cream cheese, an egg, ground cinnamon, vanilla extract...pretty much all Keto staples that are likely in your refrigerator or pantry right now.

While the ingredients are great, it's important to remember that they all have carbs, and if you're tracking your carbs closely, knowledge is key.

If you're doing lazy keto (when you eat low carb foods, but don't track) it's a different story, but I've noticed some who do keto for weight loss struggling with very low carb versus no carb foods. Foods like eggs and mozzarella have very low carbs, but sometimes when your food label says zero, it just means less than one. (They're allowed to round down).

According to the USDA, 1 large egg has 0.6g of net carbs and 1 cup of mozzarella has 4g. Not big amounts at all, but they can add up!

Here's the breakdown for this recipe, per ⅙ of the total recipe:

Just a friendly reminder that Net Carbs (or effective carbs) are Total Carbs minus Fiber minus Sugar Alcohols:

And a more in depth breakdown if you're interested!

Here are a few photos to help you understand the dough filling. I pressed the dough out into a large rectangle with my hands. (Use wet hands when working with fathead to prevent sticking)

If your dough is very sticky (it shouldn't be) try wetting your hands and kneading it for a minute. Sometimes it just needs to cool a little.

It's not really important to know the exact measurements for the next part. Make it about ¼ thickness. As long as it's a rectangle, this will work.

I placed the filling into a large ziplock/pastry bag and snipped the tip. This will let you make an easy straight line. 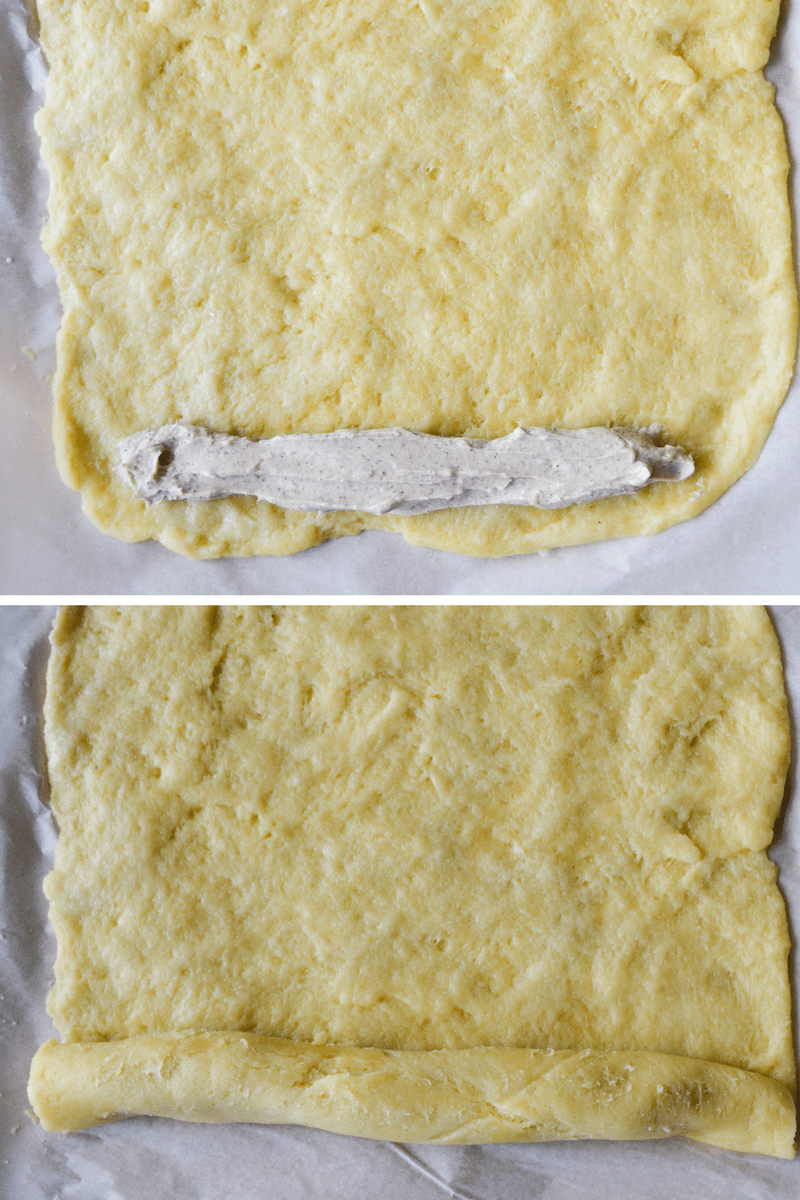 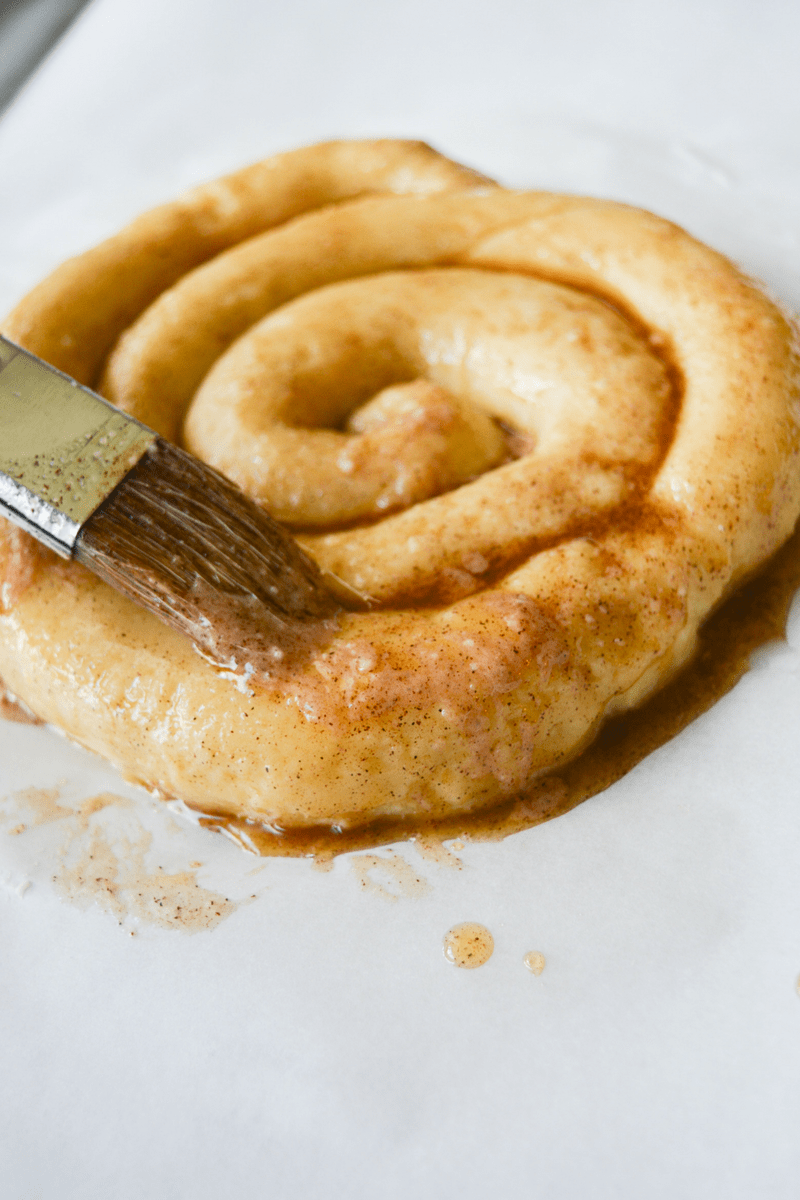 And for a yummy cream cheese frosting, try this recipe by Low Carb Maven!

I haven't tried this with coconut flour.

You may your choice of sweetener, I just personally prefer powdered erythritol.

Wetting your hands with a little water makes dough handling much easier.

If roll appears wet or excesively undercooked, return to the oven and watch closely. A toothpick should come out mostly clean. Almond flour is a bit soft when hot, so allow it to cool completely to fully firm up. This took mine about 30 or more minutes.

As an Amazon Associate and member of other affiliate programs, I earn from qualifying purchases.

Please note that I am not a certified nutritionist. Any nutritional information that is discussed or disclosed in this post should only be seen as my best amateur estimates based on NET carbs. If nutrition is important to you, I highly encourage you to verify any data you see here with your favorite nutrition calculator.

You may also enjoy... 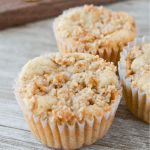 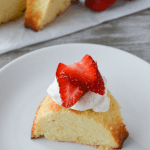 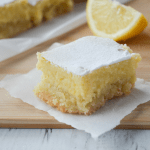 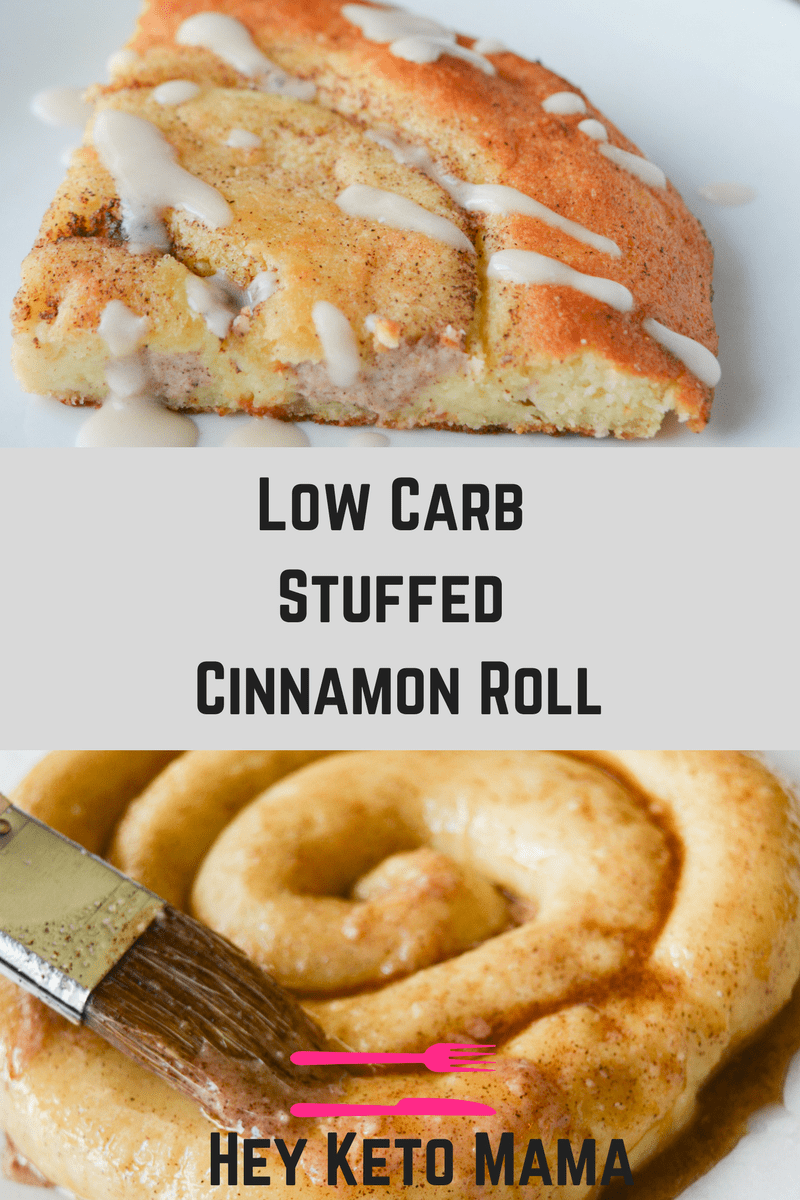 I'm definitely going to try this recipe, but I have some good news... I think your almond flour carb count seems high. Bob's Red Mill (which I usually use) has 12 net grams of carbs (24g to begin, 12g of fiber). That would bring your total for the roll to about 25g, or just about 4g per 1/6th size serving. I also found Manitou almond meal from Costco, as well as their Kirkland brand, have only 8g net carbs per cup. Haven't tried either yet though. Hope this makes you feel less guilty!

Was the dough supposed to be divided into 3 or 4 pieces? I looked all over the recipe and the only time it mentions it is in the "assembly".

@Rose, I was wondering the same thing???

Amazon is out of suggested erythritol & has no idea when it will be back in stock. Can you suggest another brand&/or can you use the monk fruit/erythritol blend? Thanks!

The monk fruit/erythritol blend should work just fine! Swerve is another brand I really like. 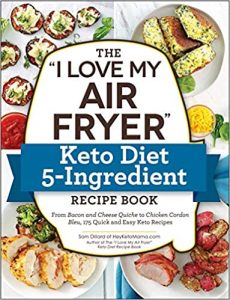 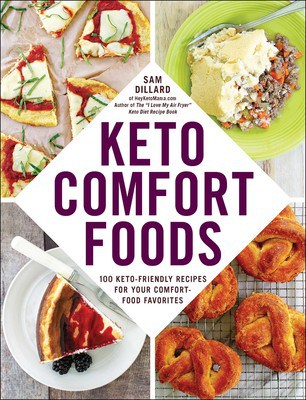 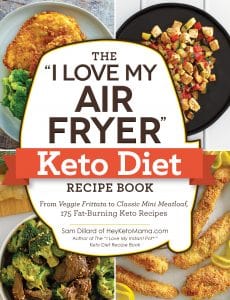 Easy Keto Recipes Are What I Do Best.

Welcome to Hey Keto Mama! I'm Sam, a lover of the kitchen and everything low carb. On my site you'll find keto tips, tricks and resources as well as easy keto recipes to satisfy your cravings and keep you on track!